Suzie Inman is a copywriter, communications advisor, and content creator who has run her own business for the past ten years.

She describes herself as a jack of all trades, working with Cornish brands like Tom Raffield, Cornwall Housing and ShelterBox as well as national clients. “A lot of people focus on images when it comes to marketing,” she says. “I’m more about using messaging and words to connect.”As well as sitting on the committee of the Porthleven Food Festival, she is famous as the Porthleven Mermaid. On occasion she can be found swimming in the sea in Porthleven and doing appearances in the harbour. “That’s a bit of fun on the side,” she says. “I’m a sea swimmer so it’s an extension of that, really.” 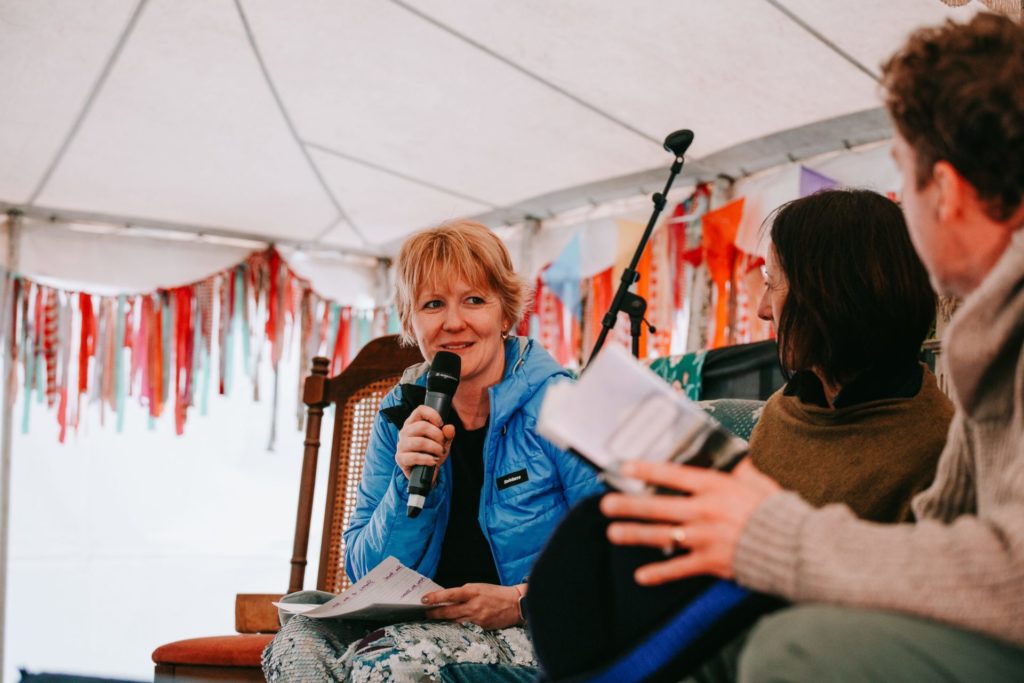 Suzie has taken a circuitous route to get to where she is today. After getting a degree in English from the University of Sheffield, she worked in sports television for a few years before going into PR for an electronics firm. When she moved back to Blackpool, where she grew up, she worked in the communications team of Blackpool Council. During the seven years she spent there, she developed a specialty in arts, heritage and tourism marketing as well as campaign management.

She moved to Cornwall about ten years ago, where she set up an internal communications function for the Eden Project. After that project ended she did a Masters’ degree at Falmouth University in professional writing. “And then when I finished the degree,” she says. “I decided that I would set up my own business as a copywriter and it’s gone from there.”

Living in Porthleven, Suzie has found herself getting involved in a number of local initiatives from the Food Festival to a plan to renovate the clocktower of the Bickford Smith Institute.

For Suzie, joining the programme was about beginning to move within the world of arts leaders as well as building up her own confidence to lead.

“You’ll see from the way I got here,” she says, “that I’ve learned my craft within an organisation and then I’ve done a qualification to understand how it works in more detail. So I guess this is a similar thing. It’s about finding methods and approaches for leadership, or how to question what’s happening rather than just being thrown in the deep end and learning to swim – which is a good metaphor for a mermaid, I suppose!”

The experience she’s gained through the leadership programme has given Suzie the confidence to negotiate harder with her clients. “The course has taught me to trust myself,” she says. “I suppose I’m a people pleaser. So it makes a difference to know that I can say no, or at least pushing back. It’s all about having knowledge of your craft, respect for the process, and the belief that there will be clients who will recognise your value.”

“And this whole thing just been quite a revelation to me about being able to make mistakes. I’m often so focused on delivery I forget to try new things,” Suzie adds. “Within the course there’s the freedom to experiment, to innovate, to fail. And to learn from that.”

After spending a career marketing other people, Suzie is planning to make a change and spend some time marketing herself. She comments on how difficult it is to take a step back from your own business and see it with a critical eye. “So I finally asked myself, what am I not doing that I should be doing if I was looking for my services from the outside?”

Her revelation was that it was time to create a blog on her website, showcasing her work and sharing some of the insights that she’s developed over the years. Free advice and resources will sit alongside the message, if you need some help, come and speak to me. Her aim is to generate inquiries from the kind of client she wants to attract by creating content that will resonate with them.

“I’d like to be doing what I’m doing,” says Suzie. “But doing it with more creative clients, and perhaps with a day off a week – because I’d like to spend a bit more time swimming in the sea!”