Angela is a co-founder of Create CIC which provides contemporary crafts facilities, workshops and skills to the people of Cornwall. 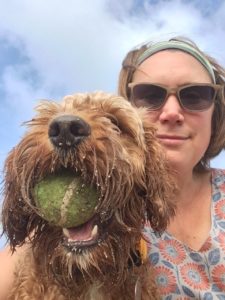 As a part of Camborne town deal, they are currently establishing and developing the Camborne Contemporary Crafts Hub in a Grade 2 listed building in the town centre.“It’s great to be part of this much-needed wider regeneration project,” she says.

“Depending on who you ask,” says Angela, “my career is either varied and multifaceted or tangential and unfocused.”

After training and practicing as an architect, she worked for CABE, the government’s advisor on the built environment. She has worked in architectural education, research and commercial consultancy, as well as in the film industry. Most recently before moving to Cornwall, she ran the Oxford Human Rights Festival for Oxford Brookes University and is an advisor to Celebrating Syria: a festival of arts and culture in Manchester.

She moved to Cornwall three years ago, pursuing a new start and a chance to live by the sea. There she met Jane Smith, an artist working in ceramics and glass who had set up a community pottery using surplus equipment donated by Falmouth University after the closure of their contemporary crafts course. When Jane was approached by the university with some glass kilns and other large-scale equipment they came together to set up Create CIC as a way to bring the equipment fully back into use and make it available for the Cornish creative community.

“I suppose like a lot of leaders,” says Angela, “we end up in leadership positions by default.”

Never having run a business or been on a board before, she found herself a director of Create CIC and a member of the Camborne Town Board, dealing with high-level strategic ideas and proposals. For her, the programme offered the chance of grounding herself in her new responsibilities.

“And this whole process has been a confidence boost for me as well,” she adds. “I hope I can continue to expand that and become what the programme aims to create: a local leader in culture and creativity in Cornwall, inspiring others to be creative.”

For Angela, maximizing the impact of creativity in Cornwall means thinking locally.

As an incomer to Cornwall and to Camborne, she is conscious of needing to ensure that Create CIC is embedded in the local community and its needs, working in partnership with local colleges and community groups as well as delivering open courses and facilities. “We want to make the local community feel ownership, that it is for them,” she says.

Camborne is a run-down, deprived, post-industrial town. For Angela, the cultural sector will succeed if it can offer real change to places like Camborne.

“We can offer something that is not just talking about levelling up, but actually doing it,” she says. “Focusing on things like creativity for wellbeing, as well as creativity for skills development. Our aim is to give people aspirations that they wouldn’t normally be able to realize. It’s not just about what you come out with at the end of it: it’s about confidence, about worth, developing transferable, as well as specific, skills.”

Creating the Camborne Contemporary Crafts Hub will be a three- to five-year project, so Angela’s ambitions centre around seeing the Hub open and functioning – and becoming a real asset of the Cornish creative landscape.

“It might be a little bit optimistic to talk about the Bilbao effects,” she says, “but we’re hoping that this Hub – not only a community facility but also a centre of excellence – will become something that will catalyse the regeneration of the town and give Camborne something to be proud of. That people will come from all over Cornwall and all over the country to use our facilities, and that locals on their doorstep will be able to use it as well.”

“Because of my background in architecture and urban design, as well as in arts management,” she concludes, “I can see the potential for places like this to have a catalytic effect on regeneration. I want to use my skills and experience to convince people of the power of creativity on so many aspects levels of life.”