Charlie is a creative producer, project and events manager and marketing specialist working within the cultural and heritage sectors and creative industries.

She helps plan and deliver funded projects, runs large and small-scale campaigns and builds partnerships and collaborations. Charlie describes her work as, “I make it happen’. 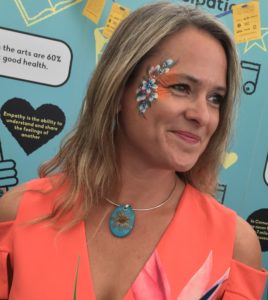 One recent project in which she was proud to be involved is the recent performance of the Ordinalia plays, a mediaeval mystery cycle that are among the few pieces of literature written in Middle Cornish 700 years ago. “You cannot understand how important that is for Cornish heritage and for Cornish culture,” she says, “and what it was like to have been part of something that strong and passionate.”

Charlie has also recently delivered an internationally reaching event for Creative UK as part of their Creative Coalition Festival.

Charlie did a degree in Literary Studies and Public Relations at the University of Exeter. She says that her lecturers considered her combined subject choices as being non-complimentary and therefore, possibly a waste of time, but she’s managed to forge a unique career from that background.

“After I graduated,” says Charlie, “I could have moved to London and gone for the big career. I went travelling which re-evaluated my sense of being and place, so I chose a life in Cornwall, which was where I felt I belonged for some bizarre reason, and I have never felt like I’ve belonged anywhere more. It must be in my blood somewhere.”

Her career has evolved through work on a series of funded projects, always working within the creative industries and heritage sector. She’s been fortunate to work with a wide range of interesting people, from leaders to policymakers to creators, “with lots of paths crossing and intermingling and intertwining.”

“Marketing as a scientific process that can be applied to any kind of product isn’t my style,” she says. “With the creative industries, you can really get under the skin of it. There’s an emotive aspect to it, where you really have to know the people you’re talking to as well as understand the political as well as geographic landscape of Cornwall.”

For Charlie, a key priority is for the people of Cornwall “to understand the value that culture and creativity brings to their daily lives, and how it can improve their lives. That it’s not a middle class frippery, (as someone described it once), but integral to the way we live.”

“Without it,” she says, “when you say there’s investment in culture, and you’re taking it away from children or care homes, people don’t get it. But if you are investing in culture to go into care homes, whether that’s music to bring joy, or VR or AI, you are giving those people a reason to get up each day. Then people won’t be against the investment.”