Laura is the managing director of Screen Cornwall, a recently founded screen agency whose aim is drive the growth of the film, TV games and animation and immersive industries in Cornwall.

She also runs her own film production company whose local low-budget feature film, The Tape, will be released shortly. 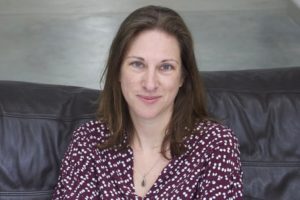 Although Laura took a show to the Edinburgh Fringe as a producer while she was at university, her first love was always television. “When I left university,” she recalls, “I applied for hundreds of jobs through Guardian on a Monday. I just got so many rejections that I had to widen my search.”

For a while she worked for an event and corporate video production company, then in advertising, and finally started a small business of her own. After that business failed, she did an MBA at Cranfield and spent some time working in management consultancy.

“But alongside all of that,” she says, “I was always thinking about what can I do in film or TV, I was still applying for jobs and never getting them. And so after I left Cranfield, which was very good at kind of helping you focus on the long term goals. I started making short films in my spare time and working with one of my MBA colleagues as a producing partnership. That’s where it all really started. Off the back of that I got a day job at the BFI.”

Eight years ago she moved to Cornwall. After a period of time freelancing and working for Cultivator, she found herself asking a question that many other people had asked: “why doesn’t Cornwall have a screen agency?”

Laura and her collaborator Philippa Giles (no relation) were the ones who did something about it. They worked to make the case to the LEP and the Council, and received funding to start Screen Cornwall in 2019.

Funded to drive economic growth, Screen Cornwall aims to have a wider impact on the sector. But as Laura points out, interventions in skills and talent development can take a long time to bear fruit. Her project aims to capture the impact of Screen Cornwall over the first three years of its existence – using both data and qualitative feedback from those who have engaged with it.

As well as supporting funding applications, this public impact report will be a key asset as the organisation applies to become a B Corp.

“Most screen agencies have been around for ages, or they’re part of Council film offices,” says Laura. “So they’re fairly limited in how entrepreneurial they can be. Because we’re new and small, we’re not tied to anything. We can start as we mean to go on, with sustainability at the core of what we do. That’s why being a B Corp is so important.”

“When I arrived in Cornwall,” says Laura, “the creative sector was hidden. A lot of it was here but I couldn’t find it. Only by working in a connecting role as a business advisor at Cultivator did I really find out who was around. But as the sector starts to thrive, that’s making everything more visible.”

Laura is excited about the impact of big moments like the recent G7 summit and the upcoming City of Culture bid, which she sees as opportunities to increase collaboration in the sector. She senses a momentum in the sector that she believes wasn’t there even a few years ago.

“There’s an interesting melting pot of people popping up all the time who are wanting to connect with Cornwall,” she says, “and maybe base themselves here. I think that’s what’s fun about it at the moment and gives you that potential.”

Laura aspires to build Screen Cornwall into one of the most sustainable and inclusive screen agencies in the UK, if not beyond, and for it to be part of a consortium of cultural partners and creative industries working on the City of Culture Programme.

Being able to make a difference around sustainability is also a major goal for Laura. This isn’t just about environmental sustainability – she is equally passionate about what she calls human sustainability, looking at issues such as long working hours and gender equality.

“That’s probably the key thing that I’m hoping to be proud of in the future,” she concludes. “I wouldn’t say we’re there yet. But that’s why the B Corp is important. It’s ‘people planet profit,’ that triple bottom line, rather than just profit or economic impact. So we’re starting as we mean to go on, and hoping to build on it in the future.”