Tom is the founder of Interactive Places, a design company which works with museums and the heritage sector, collaborating with artists and designers to create engaging installations and exhibitions. He is also developing his practice as a potter.

All his projects have three common elements: “there needs to be some kind of creativity, it’s a collaborative process, and it’s about opportunity for other people as well.” 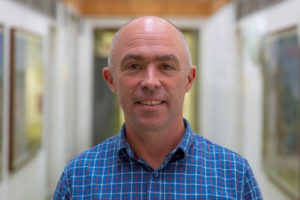 Tom worked as a secondary school teacher for about five years before deciding to retrain. He went back to university and did an MA in interactive media.

“I was working with mobile handsets before the iPhone came out,” he recalls, “doing stories and games in heritage settings. I spotted this technology and understood that it was it was potentially quite interesting and useful.”

After working for the National Trust and Historic Royal Palaces, among others, he moved to Cornwall to work for the Eden Project. He then went freelance at the end of the first lockdown.

“When I look back over my history of being an employee,” he says, “I do lots of interesting jobs, and I’m always happy for a year or two, and then I feel that constraint of being an employee in an organization and end up leaving one way or another. I think I’m just much happier being freelance.”

“I think there’s a responsibility when you see that things could be done better,” says Tom. “All those ways of working that you believe are really important, like bringing in other people and developing people. It’s a responsibility to do something, because you can’t not see that once you’ve seen it.”

Tom started making pottery a couple of years ago, but recently moved to a house with a large workshop space – which gave him the idea of developing it into a space that other people can use.

“I’m thinking of it as a social enterprise that gives opportunities for young people to learn pottery,” he says, “kids of sixteen or seventeen who perhaps haven’t done well at school, are naturally creative but would never think of going into the arts.”

He’s in conversation with Create CIC, the organisation behind the future Camborne Contemporary Crafts Hub. As Tom says, “I see what I’m doing as a bit of an offshoot of them.” One of its co-founders is also on the leadership programme and he likes the idea of this reinforcing the collaboration.

So far Tom has found equipment for his workshop and a teacher for the classes. “She is somebody who would never have gone into the arts had it not been for a neighbor who moved in and set up their pottery studio,” he says. “She then went and ended up being an apprentice for that neighbor. So she gets it – she’s part of that kind of story.”

Now his action research project is testing out these initial ideas. Where might the participants come from? Is it a real, beneficial opportunity for them? Where can he find additional funding and how might he create a sustainable business model?

Tom aspires to have built his workshop into a thriving place “that genuinely gives opportunities to people and changes their lives, gives some options they wouldn’t otherwise have had to local teenagers.”

As well as developing a successful ceramics practice for himself, he would like to be “doing something on the wider Cornish stage as part of a group of people who are working really hard to make Cornwall into a better place.”